The City of Chicago and Mayor Lori Lightfoot launched “Boards of Change”: A brave campaign that aims to transform cries for justice into sustained acts for change, by encouraging everyone to complete the Census and register to vote. #BoardsOfChange

In a time of confusion and complications, this campaign was one intended to bring people together, especially after being apart for so long. As we all know, our city was also torn apart from recent racial tensions, rioting, and protests resulting from the events surrounding the murder of George Floyd.

While the Boards of Change campaign is specifically aimed at encouraging people to be counted and registering to vote, it also created a platform for people to be heard and seen. These #BoardsofChange were simply pieces of plywood that were protecting businesses from those riots and looting.

Created and painted by various Chicago artists, the Boards of Change have become a symbol of peace, justice, and overcoming.

Not only that, but after they went on display as a platform for registering to vote and being counted, they were then transformed into actual voting booths for the very election season they were promoting. This entire project started as plain plywood that became beautiful and was then used in such powerful and purposeful ways.

We were proud to provide the build for this beautiful wall of artwork as a feature piece of the Mayor’s backdrop of this important press conference. 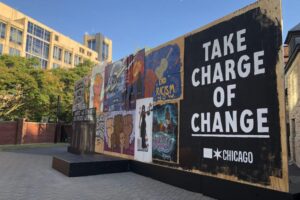 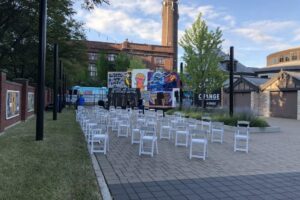 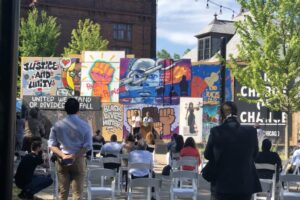 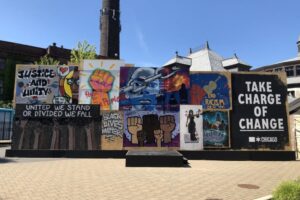 Get all kinds of resources about virtual, hybrid, and in-person events in our blog. You can find information on what kinds of events you can do virtually, get some great virtual event ideas, or see what you need to know as things reopen.  And if that’s not enough, contact us to find the best solution for your next event: virtual, in-person, or hybrid!